Judah Fox, a former student at Arts Alive, recounts how God worked during a recent trip to France in which he and his fellow theatre students used their theatre skills as a means of evangelism.

Every person, yourself included, has a gift. This gift might be singing or dancing or speaking. Whatever it is, it was given to you to help others. However, often times we squander these gifts. If you aren’t using your God-given gifts and talents to affect others, then what good are they? I learned a great deal about this when ministering in France and Belgium this past spring. I traveled to these countries with a team from the theatre department at Liberty University where I am currently a senior, studying Theatre Arts: Performance. Our goal on this trip was to use our theatre experience and training to minister to the saved and unsaved in France and Belgium. We prepared several wordless street dramas and a single one-hour long play, and then we set off for Europe. 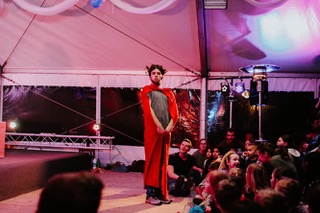 Starting from the very first day of the trip, we encountered many obstacles. After traveling for 24 hours, most of us not having slept more than an hour on the plane, we arrived in France. The schedule for the day included going to a refugee shelter for men on the outskirts of Paris. When we arrived, we were told that the play that we were to perform would have to change. Most of these refugees were Muslims who had fled from Sudan, Chad, and many other places. These men had different beliefs than we did and different ways of seeing certain actions, like the touching of women. We were exhausted, and we were falling asleep on our feet, but we needed to make changes if we wanted to have the opportunity to minister through performance. Only by the grace of God were we able to do this, because God will not let a little thing like changing a whole script on the fly stop Him from spreading the truth. 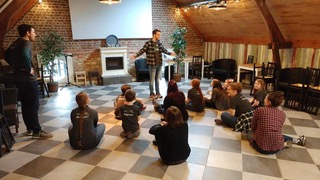 There is one other day that sticks out to me as a day where God worked through our teams’ gifts in theatre. We were told that we would be going to a bridge in the middle of Paris, where hundreds of refugees were living in tents. Once we arrived, we were to invite the refugees to come to a church where we would put on a show for them. It started to snow as we walked there, and the temperatures began to drop. We arrived at the bridge where we saw hundreds of tents side by side. In the moment, we didn’t know what to do or how to talk to the people living there; so, we prayed and then started to sing whatever songs we could think of. People started to come out to listen, and we were able to invite them to come to the program. We then walked with 125 of these people to the church where we shared the gospel with them through wordless street dramas and translated testimonies. It was a night filled with God’s love for those who don’t know Him. One special thing about this night was encapsulated by the fact that they were all filming the program. Therefore, the hope is that when these people went home, they were able to share the message of hope with their friends.

Dance as an Opportunity to Show Love

Theatre on the Mission Field